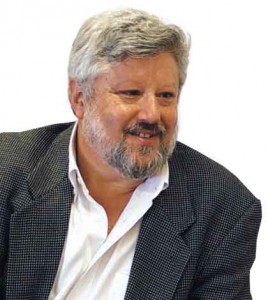 “He can do any talk he wants to and I’m looking forward to it,” Scher said.

Baskin is a peace activist who initiated the secret back channels used between Israel and Hamas that led to the release of abducted Israeli soldier Gilad Schalit. He wrote about the secret negotiations, published last year in English, in the book “The Negotiator — Freeing Gilad Schalit from Hamas.”

Baskin returns to Jackson for the second consecutive year as a guest of the Jackson Hole Jewish Community group to speak about conflict resolution and negotiating skills. In addition to the school presentations, he will also address the public in a free talk at 6 p.m. on Monday at the Black Box Theater in the Center for the Arts.

“It’s life-changing for these kids to work with someone at this level about negotiating with hostile partners,” said Mary Grossman, Jackson Hole Jewish Community executive director.

The Jackson Hole Jewish Community brought Baskin to Jackson last year, and decided it was worth bringing him back to talk with more students.

Grossman said there is value in bringing Baskin back for a second year as the Israel-Gaza conflict in August was in the news, and with social media changing discourse, there was a lot of misinformation and misunderstanding. People had strong, but uninformed opinions.

“This would be the guy to come listen to, to understand what really happened,” she said. ”This is the guy to sort things out.”

Baskin is considered a Hamas expert and while his views are progressive he’s a balanced speaker, Grossman said. His visit provides a rare opportunity to hear someone with his experience and expertise speak.

Scher and other students who heard Baskin last year recognized how lucky they were to hear someone like him talk about international affairs.

“The things he’s done in his life are absolutely incredible and he was able to share them with us,” Scher said. “He’s been in the thick of it. We hear about Israel and Palestine, but to get to hear from someone who’s been incredibly important and played an important role is amazing.”

Baskin is able to take the complex issue of Israel and Palestine and make it understandable. He also presented the issues in an objective way.

“It’s incredible how complicated these issues are,” Scher said. “We look at them from this media bias and this bias we have just being American and out of the fray of what’s going on. He gives us the point of view of ‘this is what it’s like to be living it.’ ”

Even though Scher heard Baskin last year, he’s excited to listen to him again. Global issues are always changing and there is always something new to learn, Scher said.

And while Baskin is an expert on Israel and Palestine, Scher has questions about other international affairs he’s curious to get his take on, such as global warming as a security issue, the Islamic State group and Russia.

Baskin is the vice president of Gigawatt Global, a company developing mid- and large-scale commercial solar energy projects in Palestine and Egypt. He’s also a consultant for the USAID Trade Project implemented by Deloitte International.

Baskin served as the Israeli co-director of a public policy think tank, the Israel/Palestine Center for Research and Information, which he co-founded in 1988 and remained involved with until 2011. Baskin founded the organization after 10 years of working in Jewish-Arab relations in Israel with Interns for Peace and as director of the Institute for Education for Jewish-Arab Coexistence. He still serves on its board of directors.

Baskin received the Histadrut Prize for Peace in 1996, the Turkish Foreign Policy Institute Peace Prize in 2004, the Tribute of Honor and Courage from the World Movement for Democracy in 2004 and the Search for Common Ground Journalist Award for Middle East Journalism in 2005 and 2007.