Bujumbura, May 12 — After a year of development, state-owned utility REGIDESO signed an historic Power Purchase Agreement (PPA) with Dutch-American developer Gigawatt Global Cooperatief to acquire much-needed electricity for Burundi’s citizens and signed in the presence of Nertherlands’ Ambassador to Burundi Mr. Jolke Oppewal. The additional power will be produced by a 7.5 MW solar photovoltaic field that is to be constructed in the Gitega province.

The PPA specifies that REGIDESO purchase the power generated by GWG’s solar field for a period of 25 years. The field, targeted for completion in 2016 will be connected to Burundi’s national grid. It is estimated that the field will add 15% to the country’s generation capacity, bringing power to an additional 60,000 homes and businesses.

GWG-Burundi was recently awarded two grants totaling nearly $1million in favor of the project. The first is from the Energy and Environment Partnership (EEP), a collaboration of the Finnish, Austrian and British governments. The second is from the United States Trade and Development Agency. The total cost of the project will be approximately $20m.

GWG is a founding partner of White House initiatives Power Africa and Beyond the Grid, dedicated to the development of new energy projects in Sub Saharan Africa, where 600 million people live without access to electricity.

GWG VP of Finance and GWG-Burundi Managing Director Michael Fichtenberg said “With support from the American and Dutch Governments, GWG has developed an excellent project to address the extreme electricity deficit in Burundi with clean and renewable energy. We commend REGIDESO for this pioneering program and we are pleased to work together to realize this critical infrastructure project in 2016.”

GWG is working with the Polytechnic University of Gitega, international NGO’s, and the local community to develop a Corporate Social Responsibility program to enhance knowledge transfer and support community development.

The legal process was led by Gigawatt Global's Group Paris-based Counsel Chana Gluck, with support and on the ground assistance from ENS Africa.

Yosef Abramowitz, president of Gigawatt Global said, “We are prepared to develop 1,000 MW of solar power with a value of $2 billion in Africa by the year 2020. Access to green, affordable power should be seen as a fundamental human right, as the nations of the world head into the Paris Climate Conference.”

GWG is the successful developer of an 8.5 MW solar field in neighboring Rwanda, which reached interconnection in August 2014 and is a finalist for EnergyNet’s MegaWatt Leader 2015 Award. 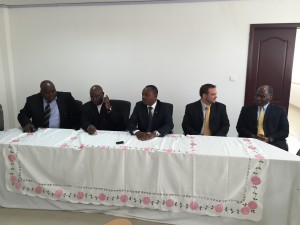