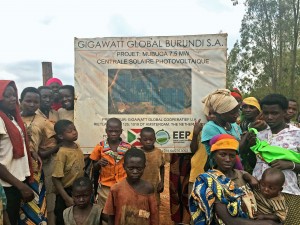 Mubuga, Burundi — As violence erupts in the capital, plans for the country’s first major solar plant bring hope to thousands whose lives will be transformed by electricity.

When entrepreneurs and government ministers signed a deal for the first major solar power plant in Burundi, the future of this energy-crippled nation seemed full of promise. A day later, gunfire filled the streets and buildings were set ablaze as a renegade army general attempted a coup.

Such are the peculiar challenges of harnessing renewable energy in one of the more unstable corners of Africa. “We were so excited,” recalled Lazare Sebitereko, programme manager in Burundi for the solar and social development company Gigawatt Global. “It was upsetting because we wanted to get on with our programme. We didn’t stop completely but it’s slow compared to what we expected.”

Nevertheless, Sebitereko hopes that work will begin by the end of the year on a 7.5 megawatt (MW) solar farm that will change lives in a small, landlocked country where just one in 25 people has residential access to electricity. It will be spread over 17 hectares of land in Mubuga village, Gitega province, 65 miles from the fraught capital, Bujumbura.

Gigawatt Global is drawing on lessons learned in neighbouring Rwanda, where last year it opened east Africa’s biggest solar field at 8.5 MW. But despite their similarities in climate, topography and culture, Burundi is currently a more unpredictable and risky proposition.

Sebitereko and Jean Jacques Nyenimigabo, an adviser to Burundi’s president, paid a visit to the remote site in September, taking a journey of breathtaking beauty among verdant hills and valleys, where men on bicycles cling to the backs of trucks to ease their passage on the winding roads. The delegation was greeted by performers wearing white, red and green robes, beating drums patterned with the national flag, and dancing inside a circle of local villagers including four boys who had climbed a tree. A police officer filmed the scene for posterity with an iPad.