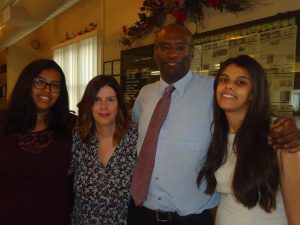 Photo Above: Michael Fichtenberg, Managing Director of GWG Burundi, pictured here with Hon. Jean-Jacques Nyenimigabo, Advisor to the President, representatives of the Polytechnic University of Gitega, Omer Ndayishimiye, Representative to the Gitega Municipal Council, (and, pictured below, Eric Kira, land owner of the project site,) hopes that 15% of Burundi’s power will be provided by the sun by next year. 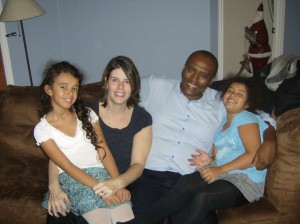 Eric Kira, pictured here with his wife and daughters, is a native of Burundi and is providing a parcel of his ancestral land for the solar field.

Burundi Signs Up for Solar

(Arlington, VA) — Gigawatt Global, a leading solar and social development company and a partner of Power Africa and Power Africa’s Beyond the Grid sub-initiative, signed two international grants for a solar project in Burundi, where only four percent of the population has residential access to electricity. The proposed project, a 7.5 Megawatt (MW) solar field, will increase the country’s generation capacity by 15%. This follows on Gigawatt Global’s successful launch last month of East Africa’s largest utility-scale solar field, which added 6% to Rwanda’s electricity generation capacity and for which it was nominated for the 2015 Nobel Peace Prize.

The effort in Burundi is being supported by two grants totaling nearly $1 million, from Power Africa via the U.S. Trade and Development Agency (USTDA) and the Energy and Environment Partnership (EEP), a coalition representing the British, Finnish, and Austrian governments.

Gigawatt Global plans to develop and manage a 7.5 MW solar PV field on a 15-hectare site in the Gitega region, 65 miles from the capital of Bujumbura. The facility will produce electricity needed for 60,000 households. The total cost of the project is estimated to be approximately $20 million.

“Our impact investment model is to strengthen developing nations, both economically and environmentally, by providing renewable energy sources where they are most needed,” says Yosef Abramowitz, President of Gigawatt Global, an American-owned Dutch developer. “We plan to build 1,000 solar megawatts in Africa by 2020, thereby providing electricity to millions of households and institutions that are currently without the most basic of human needs.”

USTDA’s grant will fund a feasibility study that will address key technical and economic aspects of the solar project, conduct environmental and social impact assessments, and provide the necessary analysis for the project to secure financing. The grant funds awarded by EEP will be used for pre-development works and legal costs.

Currently, Burundi experiences a high frequency of blackouts, with downtime in electrical access an average of two days a week. Burundi has a total of only 52 MW of installed electrical capacity, including 15.5 MW of diesel-generated power.

"We are honored and pleased to be moving forward in partnership with Gigawatt Global — a tier 1 solar developer — to build the first utility-scale solar field in Burundi. We embrace the development of renewable energy as a means of increasing Burundi's electrical generation capacity, thereby stimulating economic growth and providing a range of opportunities for the Burundian people," said Hon. Come Manirakiza, Minister of Energy and Mines of Burundi.

The Government of Burundi has signed an MOU with GWG for the development of the project, which will positively impact the country’s development by creating full time project maintenance jobs, part time construction work, and jobs from support contracts with local businesses. Additionally, GWG is working with the Polytechnic University of Gitega, international NGO’s, and the local community to develop a Corporate Social Responsibility program to enhance knowledge transfer and support community development.

Gigawatt Global’s VP of Finance and Managing Director of the GWG Burundi project, Michael Fichtenberg, reports that “GWG has been working closely with the Burundian Government and is pleased with the progress made to date. The Burundi Government’s good will, with the close cooperation and support of the U.S. and Dutch Embassies, has been crucial in advancing the country’s first utility-scale solar energy generation facility that addresses the crippling energy crisis and will directly contribute to economic growth and stability of Burundi. We believe that this pioneering solar project can be the bellwether for further western investment in Burundi.”

Gigawatt Global (GWG), a US-owned Dutch company, is the successful developer of the first completed project of Power Africa’s sub-initiative Beyond the Grid. The 8.5 MW field, located on the grounds of the Agahozo-Shalom Youth Village near Kigali, reached interconnection in July 2014. 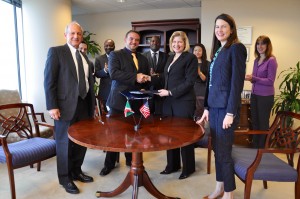 ARLINGTON, Va. – Today, the U.S. Trade and Development Agency awarded a grant to Gigawatt Global Burundi S.A. to support the development of a 7.5-megawatt (MW) solar photovoltaic power plant in Mubuga, Burundi. The grant funds a feasibility study that will address key technical and economic aspects of the solar project, conduct environmental and social impact assessments, and provide the necessary analysis for the developers to secure financing.

“This project presents a unique opportunity to link U.S. industry expertise with the advancement of clean energy in Burundi,” said USTDA Director Leocadia I. Zak, who signed the grant agreement along with Gigawatt Global VP of Finance Michael Fichtenberg. “On behalf of our partners under Power Africa, which seeks to increase access to power and promote greater private investment in sub-Saharan Africa’s energy sector, USTDA is pleased to formalize our partnership with Gigawatt Global Burundi.”

“The preparations for the Burundi plant build upon our success in Rwanda, where we recently launched East Africa’s largest utility-scale solar field with the help of our Power Africa partners,” said Mr. Fichtenberg.

Currently, only four percent of Burundi’s population has residential access to electricity. Implementation of the proposed solar plant would increase Burundi’s installed electricity generation capacity by an estimated 15 percent, helping to power over 60,000 households and businesses. The plant would be the first utility-scale solar energy generation facility in Burundi.

The opportunity to conduct the USTDA-funded feasibility study will be competed through Federal Business Opportunities (FBO). A link to the FBO announcement will be posted to USTDA’s website
at www.ustda.gov. Interested U.S. firms should submit proposals according to the instructions in the FBO announcement.